Gary and Jan Dawson have been the club’s hosts since 2005. They brought with them a vast amount of experience in the hospitality industry having managed large pubs in Greenford, Middlesex and Hemel Hempstead in Hertfordshire.  A move north to Lancashire, a bit closer to the Wirral where both Gary and Jan grew up, saw them managing two further pubs in Chorley and Preston.

Jan started her career trans-Atlantic where she worked as an au-pair in the United States.

A desire to spend more time with their young children, Jemma and Josh, led to the family moving to Loggerheads and later to Wem, with Gary taking up positions with Safeway to manage the supermarket giant’s takeaway food outlets, before a complete career change took him into railway management including a four-year spell as Station Manager at Shrewsbury.

Gary and Jan moved to the area as Gary had visited Shropshire on a number of cricket tours and really loved the county.

In 2005, an advert’ in the Shropshire Star caught Gary’s eye.  Prees Cricket & Recreation Club were looking for someone to manage their newly-built facility.  Gary takes up the story:

“I saw the advert’ for a club manager in the paper and thought I’d go and take a look at the new building.  I was starting to think about going back into the pub trade and had received an offer to manage a pub in Epsom, Surrey, but we were both reluctant to move south again.

“When I arrived at the club, there was one car in the car park with a man sitting in it with a huge architectural drawing spread out in front of him.  This turned out to be Ray Grocott who invited me in to have a look around the club which was a couple of months off being completed.  The rest, as they say, is history.

“After a three-hour interview with the committee, I was appointed and Jan very quickly came on-board to work with me.  Going up to look at the club that day was the best decision I’ve ever made.”

Gary’s love of sport and particularly football and cricket which he’d played regularly, made his new role even more attractive. “I love being involved in competitive sports and we have plenty of that going on here with the many sports we’re involved in and we have staged many big sporting events,” he says.

And what do Gary and Jan like most about their roles at the club?  “We live in the village, a few yards from the club, and feel very much part of the community,” said Jan.  “We know everyone and have met so many great people over the years.”

Gary and Jan have known each other for 34 years and have been married for 24 years. The club is definitely fortunate to have such a great team at the helm. 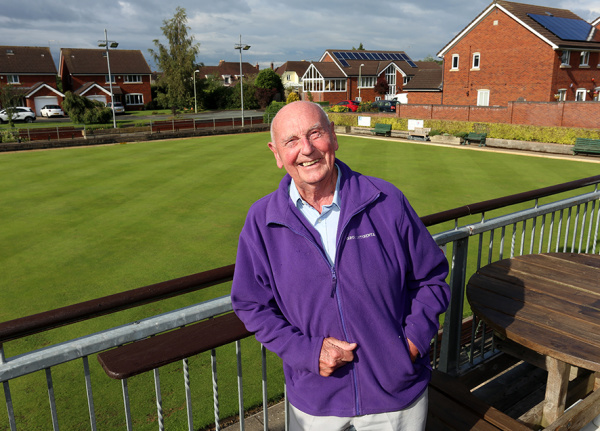 Over the last 25 years, our Club President has been instrumental in not only securing the long-term future of Prees Cricket & Recreation Club, but also creating one of Shropshire’s premier sporting and community venues.

Back in 1997, through his company Grocontinental, Ray made a £25,000 donation towards the funding of the club’s new multi-purpose fenced 53m x 53m sports pitch which was doubled by the Sportsmatch funding scheme.  The Government scheme was devised to encourage British businesses to provide sponsorship funding for grassroots sport.

Ray led the project to re-site and totally rebuild the club, through the sale of land owned by the club to generate construction funds.  The new clubhouse was opened in 2005 and it quickly became the hub of village life in Prees.

Since 2005, both personally and through his business, Ray has donated £164,000 which generated an additional £41,000 of Gift Aid funding claimed by the club through its registered charity status.  This has contributed towards floodlighting, maintenance equipment, the installation of solar panels to take advantage of renewable heat incentive payments.

Ray has also sponsored a number of high-profile bowling events staged at the club over recent years including the Floodlit Open Doubles Championship which he supported from 2013 for six years, the National Doubles Open and the prestigious Jack & Jean Isherwood National Seniors Tournament which showcases the finest bowling talent from across the country. He has sponsored this tournament for the last ten years.

In 2020, Ray’s backing helped to inject new life into the club when the club underwent a refurbishment programme, the extensive car park was resurfaced and a new building to house maintenance equipment was constructed and fitted-out.